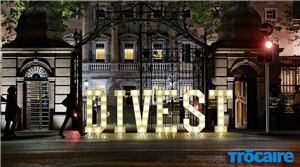 "We call for ambitious and immediate action to be taken in order to tackle and overcome the devastating effects of the climate crisis."

BREAKING: Fracking has started in Lancashire.

Days after the UN warned we have just 12 years to keep warming to 1.5 degrees, our Government has opened up a new fossil fuel frontier.

This is a crime against our climate. Say no to fracking ⬇️https://t.co/CErRKhdKUp pic.twitter.com/aRNX7E99pf

“The fossil-fuel #divestment movement is gathering pace, with the number of institutions divesting coal investments up fivefold in the past four years," @GoldmanSachs on Big Oil needing to evolve into Big Energy or die.#divest #SRI @anussbaum1 https://t.co/862YsNEWwd @business

"[Oil and gas industry] are trying to subvert the #divestment movement through PR rather than propose a real alternative to #fossilfuels to tackle #climatechange.” -Jessie Amadio, @divestlondon https://t.co/kWYczHbGZf pic.twitter.com/b1TyshZxc4

Some of the best evidence yet that fossil fuel #divestment is making an impact — oil giants like BP are whining about it constantly! https://t.co/DdnW8FdBTm

Shell's $1-$2 billion planned annual investment in renewables is dwarfed by the $25 billion invested in traditional fossil fuels. This company is planning to fail the Paris agreement. Time to change direction Mr Van Beurden! https://t.co/yrFKttIu6z via @telebusiness

Today in the New York Times: an article about the successful and creative movement against museums that accept money from oil and gas companies, featuring @FFcultureNL! https://t.co/JWxsGbj3mh #divestment #fossilfreeculture #DropShell pic.twitter.com/TTnJ30hIIz

With the facts of the #IPCC report laid bare, what is your vision for the *most* effective way to scale up so that our global response to climate change matches the urgency needed? How do we peak emissions by 2020? If your choice isn't shown, pls explain.#1o5C #ClimateEmergency

https://t.co/pVb8htIbVv now going for the banking sector in a big way with a simple message: "1.5°C = No New Fossil Fuels." https://t.co/Yd9hjAQigu
The time for banks to stop financing expansion of the fossil fuel sector is NOW. #FossilBanksNoThanks

There’s one company @blackrock that owns more climate destruction than anyone else on earth. That’s a BIG problem. We just launched a new campaign to hold them accountable https://t.co/gYkdAnaI5i pic.twitter.com/AYH5Ik6sRL

We have 12 years to limit climate change catastrophe, new UN report warns today. Fossil fuel companies vehemently disagree, they want to keep digging forever, so we have to take away their sources of finance.https://t.co/VhpTjYYmXY

Well, here's some good news: commitments to divest from fossil fuels have topped the $7 trillion mark. That's with a T.https://t.co/8ZDhwKpYKo

Global commitments to #divest holdings in #FossilFuel companies have powered past the $7 trillion mark. $7.17 trillion and counting… https://t.co/xFRWdkvo6Q via @GoFossilFree #Divestment #EnergyTransition

Open letter congratulating @RCGP on its #divestment from #fossilfuels and calling on others to drop #gas, #oil & #coal too. Pls sign + share with your GP colleagues! #fossilfree https://t.co/GxBEkmww9J @UKHealthClimate @ClareGerada @carolinejmolloy @doctor_oxford @HealthyPlanetUK

One investment professional explains why he and @PurposefulMoney, his firm, has gone 100% fossil fuel-free https://t.co/qhzrEa3rGP #divestment

“There is an inherent subsidy in any oil burning device, any power plant or car that is fundamentally consuming the carbon capacity of the oceans and atmosphere.” ⁦@elonmusk⁩ #divestment #ClimateAction https://t.co/vBkYwLUYad