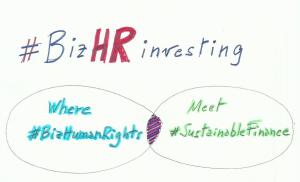 New: Following the Swiss NCP decision in the UBS/Hikvision case bought by @Rightsbehindyou, the @UNHumanRights Office confirmed to @BankTrack & @OECDwatch that banks *do* have human rights responsibilities when acting as nominee shareholders. https://t.co/zlrN34CC3R

How can financial institutions as investors engage with their portfolio companies to promote respect for human rights?
Read our latest report below.
(commissioned by ASN Bank)#responsibleinvestment #bizhumanrights #ESG https://t.co/LV3mR6JWFO pic.twitter.com/aC9TsO6AyQ

JUST OUT: @UNHumanRights says PE investor action to address risks to people in biz models is an urgent priority for entrepreneurs wanting to embed ethical values in their ventures; for public investors; for generations of users; & for society. Here's how👇https://t.co/2UESQ3D9QO pic.twitter.com/2zKA943kii

🚨Breaking news🚨
⚖️The Cour de Cassation, #France’s🇫🇷 highest court, has just confirmed that cement giant #Lafarge can be prosecuted for complicity in #crimesagainsthumanity, for having paid millions of USD to the #IslamicState in order to pursue its activities in #Syria🇸🇾.

Thank you sincerely to @hm @ca_europe @ZARA for leading and signing on to the new #Accord, which is now a ground-breaking INTERNATIONAL workplace safety agreement in fashion that is binding on brands. This is huge. #BrandAccountability https://t.co/Q7Tfj3kVEB

Let's celebrate a big victory for garment workers as unions and companies have agreed to extend the Bangladesh Accord in Bangladesh and other countries. The legally binding Accord is a model that works and many investors support it! @ICCRonline @uniglobalunion @PRI_News @BHRRC https://t.co/pUfwjLmEc0

The 3rd draft of UN Binding Treaty on #bizhumanrights includes “financial institutions and investment funds” under definition of eligible business activities. Next round of negotiations is in October. Glad to see @RI_News_Alert covering this story! https://t.co/ld8XOg4h3q pic.twitter.com/i33Qw06nRf

Loi du Vigilance, a pioneering French law that demands companies to set a plan to avoid human rights abuses in their operations and value chains
A lot of work ahead, but still better than nothing https://t.co/Wzc3iuROA6

📢 Norway’s largest pension fund KLP divests from 16 companies for their links to Israeli settlements in the occupied #WestBank, including telecom giant Motorola 📢

KLP describes it as “a very straightforward decision"#BizHumanRights#humanrightshttps://t.co/2dhRDLbjZq

“Investors should undertake rigorous human rights due diligence of their portfolio companies & seriously consider the risks of investing in those with a red-flag history of engaging in SLAPPs or other forms of judicial harassment of defenders” @DewinterSchmitt @BHRRC @ICCRonline https://t.co/tP11P9Dnyt

The German Supply Chain Due Diligence legislation, approved on June 11th, could be a gamechanger in #bizhumanrights. It is more ambitious than extant legislations like the UK Modern Slavery Act or the French Loi de Vigilance. Great explanation by @rGrabosch #lieferkettengesetz https://t.co/yF7QLDlYOM

Baidu made history when it put out a #humanrights policy last year, but the company remains silent when it comes to government requests to censor content or handover user data. We call on Baidu to increase #transparency. @AccessNow’s letter to @Baidu_Inc https://t.co/ZdROXUHHgV

On Monday, May 31, the CNCA will release a model law that provides lawmakers with a blueprint for a new international corporate #accountability law in Canada. Watch the press conference at 10:30 am EST on Facebook Live: https://t.co/ysWhLXhqd1 #bizhumanrights #CAN4mHREDD pic.twitter.com/Z1H4JSsd6p

VIDEO | A quick update on what is happening in Europe 🇪🇺 around mandatory #humanrights and environmental #duediligence: https://t.co/Jj33457p63 #mhrdd #mhredd pic.twitter.com/PFKZfSE460

EU Parliament greatly did its part, now up to the Commission – we expect nothing less ambitious @dreynders: https://t.co/rChC62rCPm#BizHumanRights https://t.co/2PYLUZdRcC

Hot off the presses, a great feature on our BRAND NEW index, via @FastCompany @robpegoraro:

"A new report on the human-rights policies of 26 tech and telecom firms around the world delivers a harsh verdict: From Alibaba to Vodafone, they all get an F."https://t.co/wcpAws9Hyr

Companies are failing to live up to commitments to respect and protect users’ rights. What can investors do about it? How to be part of the solution, not the problem, tomorrow. https://t.co/cselTTD4Dq

4/8 What’s #TradePolicyReview got to do with #BizHumanRights? Trade policy has an important link with #duediligence with a particular focus on #forcedlabor The Commission promises effective action to ensure that forced labor does not find a place in the value chains.

Minutes ago, the 🇩🇪 Government announced that a Supply Chain Due Diligence Act will be passed in the next months. “This will be the strongest such statute in Europe, even globally.” (Minister for Labor Hubertus Heil) · 1/7

The Supreme Court rules that there is a good arguable case that Shell is legally liable for pollution of two Nigerian communities. A watershed moment in the fight for corporate accountability. https://t.co/Wt8fK1KT2o

Read about the latest work of investors addressing biz and #HumanRights concerns in the latest newsletter from @InvestForRights, including a blog from @WilksSaskia & @JBlankenbach of @BHRRC on the importance of mandatory #HumanRights due diligence
👉https://t.co/j68dy2y901

NEW STUDY!🚨How can we stop products made with forced labour from being sold in the EU?

✅Our study provides concrete answers & calls for a new EU trade instrument allowing us to ban imports in cases of #ForcedLabour.

Momentum for corporate accountability is growing ✊

We've just updated our list of legislative and political developments in the field of mandatory due diligence & corporate liability.

🎉 What great news for #climatejustice !

13 years after, @Shell is finally sentenced to compensate farmers in Nigeria✊🏽 #StopShell https://t.co/c7usL6UYWG

Hot off the press 🗞️: @UNHumanRights' briefing on responsible investing in #tech. Investors have unique influence over how tech cos are governed, make decisions & act. They have a responsibility to ensure these investments don't harm society. Here's how 👉https://t.co/blqdxLObcY pic.twitter.com/I3QVQQln3H

MEPs: Hold companies accountable for harm caused to people and planet 🌏👷‍♀️@EP_Legal paves the way for a new EU law that requires companies to comply with human rights & environmental standards within their value chains. #DueDiligence

Join us on 4 March for our event 'Money as Complicity – The role of banks in international crimes'. For more information and registration:https://t.co/tjuH3uL8Ei

"about 60 documented murders of mining activists have been recorded annually in recent years…Ten days after an assassination, Lane and his colleagues found, the market valuation of associated companies fell by an average of about $100 million" https://t.co/3lq9F9A001

As I may have already tweeted, in high risk environments supply chains include private #security providers. Investors then must start focussing on this as part of #ESG reporting. #bizhumanrights #duediligence @icoca_psc https://t.co/vQY9Wvy1h8 via @business

The Resource Centre is hiring! 📣

We're looking for a Latin America Regional Manager to lead our work in the region alongside our resesarchers in Mexico, Colombia & Brazil. Apply by Jan 24 👉 https://t.co/I7t3pGlF9E #bizhumanrights pic.twitter.com/MpWq8gnSor